A law professor in Illinois wants to put a stop to a medical practice that she says treats women’s bodies like cadavers.

Across most of the U.S., teaching hospitals allow medical students to conduct pelvic exams on female patients without their knowledge or explicit consent.

Some medical schools say these exams are standard practice and necessary to teach students. And the practice remains legal in all but six states, including Illinois and Iowa. 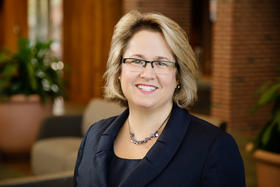 But Robin Fretwell Wilson of the University of Illinois at Urbana-Champaign says women should have a say on the issue. She hopes to draw attention to it in the wake of the #MeToo movement.

Side Effects Public Media spoke with Wilson about her recent Chicago Tribune editorial, calling on medical associations to help end the practice.

Side Effects: I imagine a lot of women would be disturbed to learn they may have been subject to a pelvic exam without their knowledge or consent. How common is this practice?

Robin Fretwell Wilson: Well, we actually don't have terrific data. What we have are accounts from medical students who say, "I'm disturbed, why aren't we having a conversation about this, in terms of medical ethics?" We have residents saying that it was a normal teaching practice. So, we know the practice happens as a teaching matter. We know that often it's not consented to.

The last regional survey that we have is from 2003. At five Philadelphia-area medical schools, 90 percent of the students said that they had been asked to do a pelvic exam on a woman under anesthesia, and we presume it was without their knowledge or consent.

Does this happen only during something like a gynecological surgery or other surgeries as well?

Other surgeries as well. In fact, what sparked the opinion editorial and the call for a sustained change was basically a woman reaching out to me from Arizona who went to the hospital for stomach surgery and then is told by a resident after the fact that medical students had done a gynecological exam. Well, there's some distance between your vagina and your stomach that was not necessary to the care that she received. It was done without her consent.

And we hear those stories again and again from usually medical students saying they think that's what happened. Patients often don't know.

Illinois is actually one of six states that bans non-consensual pelvic exams. This was a result of public outcry over the issue that goes back to the 1990s. And then what happened? Did the momentum just kind of fizzle out?

It seems like it goes in these spurts. So there'll be a study or an ethics examination that says we're doing this and then people go, "You've got to be kidding me right. We've had biomedical ethics for 30, 40 years, certainly we don't do this." And then the answer back will be, usually from students: "Well I've been asked to do this and I didn't feel right about it at the time." And then that will sort of die out.

And maybe laws were sort of passed in the interim; that happened after the Federal Trade Commission had hearings and there were a set of laws that were passed. But if there isn't oversight by an accrediting body, if there is nobody looking over the shoulder of attending physicians doing this work with medical students, then I think sometimes the easiest impulse is to say, "You know, nobody will care. We should just get on with it."

Are you hoping that this issue will get revived, perhaps now in the wake of the #MeToo movement?

I think so. I think sometimes we can make legal changes that are sophisticated. But without that oversight piece, tying it to accreditation, it's hard to operationalize.

I think a lot of folks will be deeply, deeply disturbed by knowing that this might have happened to them or could possibly happen to them. So my hope is that we are thinking a lot harder about women's dignity in all kinds of ways; women's capacity and their autonomy. And this should be part of that broader discussion.

And like the #MeToo movement, I think people saying, "Look, you need to ask. #JustAsk," can be a way that we can get cultural change even when we don't have legal change.